Day Four was spent on the road, again.

This time, however, our journey only took a measly five hours! We arrived in LA in time for Eddy to watch most of the US/Belgium match on the hotel TV (he had to watch the first fifteen minutes on his phone).

The countryside was so dry! I had overheard a group of people at dinner the night before talking about the effects of the drought on Tuolumne County (and Norther California in general) and we could really see it as we made our way south.

Once we arrived at the hotel, Eddy watched his game and I took the kids swimming. When the game was over (we lost! boo! at least there’s still France!) and the kids’ wigglies were out, we headed off to Grandpa’s house. Owen immediately started trying to coax any of the many stray outdoors cats to make friends–not that that was going to happen with two dogs around! 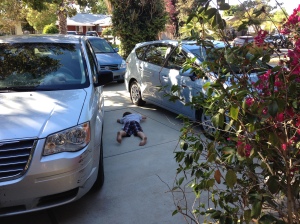