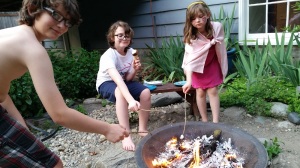 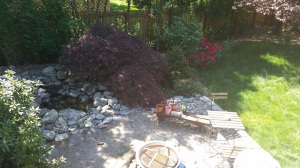 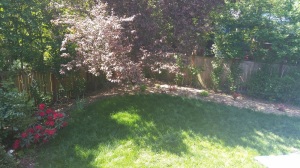 I’ve been thinking and planning (and pinning!) ideas for the yards this year. Carolyn, Wonder Gardener, also has a bunch of ideas, and I’m looking forward to really tackling the back yard this summer. In addition to the driveway side yard and putting in the steps in the other side yard, I wanted to do some work on the back patio…in fact, redo the back patio. Eddy and I (and the kids, but let’s be honest, probably mostly Eddy) can do a lot of the manual labor, but we will need some help designing and working through the steps of the project.

The goal for the patio is to make it a more comfortable place to be outside. It’s a little small right now, disconnected from the rest of the yard and it drives me nuts that I can’t sweep it clean. I’d like to enlarge the patio to curve around in front of the deck stairs and get rid of the awkward bit with the rose bush and strange ground cover. I’ve seen some beautiful ideas for concrete planters, and would love to have a big one that doubles as a seat as the dividing area between underneath the deck and the patio. I’d love to rebuild the pond with a proper pond liner, put steps in between the house and the pond and make it less beachy in general by using concrete or brick pavers instead of gravel. Basically, I want something that is smooth to walk on when barefoot, large enough to entertain and that won’t get torn up when Stella goes running through it chasing after Penelope.

I’ve also been considering the area where the berries used to be, and the side yard on the north side of the house. Eddy built one raised garden bed last year and I want to build a few more this year. We had planted some flowering shrubs (azalea, heather, rhododendron) on that side, but I would move them to the other side of the yard, more in the shade as a nice counterbalance to the area next to the pond. Once we redo the pond, we will probably need to recreate the overflow area. We have a ton of rocks that could be used for a rock stream bed, and will have even more once the patio is redone. This will make a nice border and overflow area for the plants next to the pond. I’d also love to beef up the area under the tree where we have the hostas and heucheras that kept getting eaten by slugs last year. Finally, I’ve been reminded of how much I love gardenias by the pins that keep popping up when I go on Pinterest, but I don’t know if they would be suitable for the space. If they are, though, I would love to have some!