One of the things that kept us going after the election was having a common sense of outrage that we could channel all of our chaotic emotions towards. Kate and I were each gifted knitted pussy hats. Kate asked why the hats had ears, and her look of outrage when I explained the reasoning to her made me even sadder.

Very quickly after the election, it seemed, there were a number of demonstrations and protests planned. We decided to go to the Women’s March on Washington, on January 21, and we were not alone. A few weeks before we went to the School of Visual Concepts and made a bunch of signs for everyone. There was going to be a big crowd going: the five of us, my mom and Rebecca (Amy was out of town).

Kate and I had a lot of feelings and made a lot of posters. 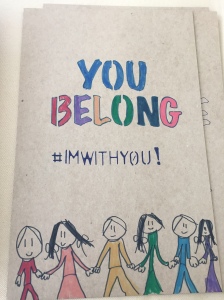 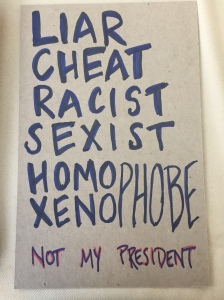 We got on the bus up the street from the house and only got a seat because we are very near the beginning of the route. By the time we were five or six stops in the bus was full and everyone on it was heading downtown to the march.

We were going to transfer near Husky Stadium but soon realized that we needed to get off at an early stop in order to maximize our chances of getting on a bus at all. We decided to transfer on the Ave, but everybody else had the same idea, and we waited nearly 40 minutes in the line to transfer. While we were waiting in line though, we ran into Sarah (Kate;s Girl Scout troop leader) and her daughter Diadora. Finally, we decided to pick up the march at a point close to the beginning of the route, and so were able to jump on another bus. The bus got us fairly close and we waited for about an hour near Union Station.

When the march got closer we waited a little bit to be able to see as many marchers as possible, and also because we were hoping to catch up with Cass. When she called me from the park about half an hour after we saw the first marchers, and asked if it had even started yet, we realized that meeting up was going to be impossible and so we started walking. It was incredibly moving to be in such a crowd of people who felt the same things we did. 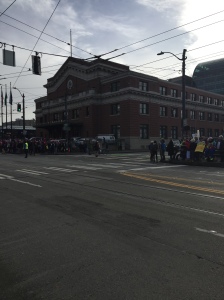 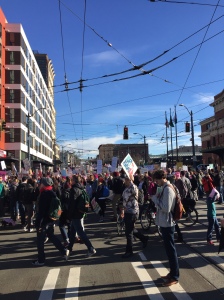 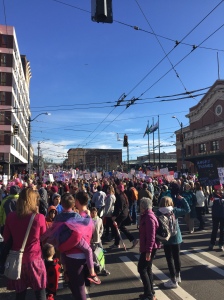 We took a break at the library to go pee and refill our water bottles, and then we took another break when we got closer to Westlake Center. The kids were getting tired and we were close to the Light Rail so we decided to head home. 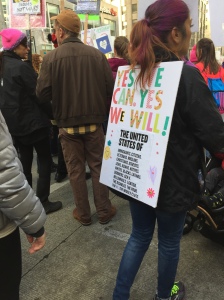 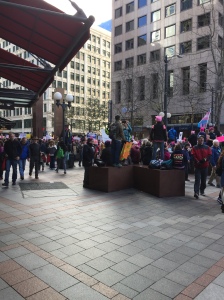 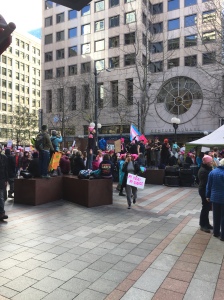 Millions of people around the world, but especially, around the United States, marched that day. It was the first time that I felt a glimmer of hope on the horizon. 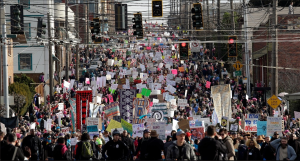